Google Earth has reached version 6. The revolutionary satellite imagery app, with which you can comfortably travel around the globe, includes a bunch of new features that make it a more interesting – and easier to use – application. Let’s take a look at them. 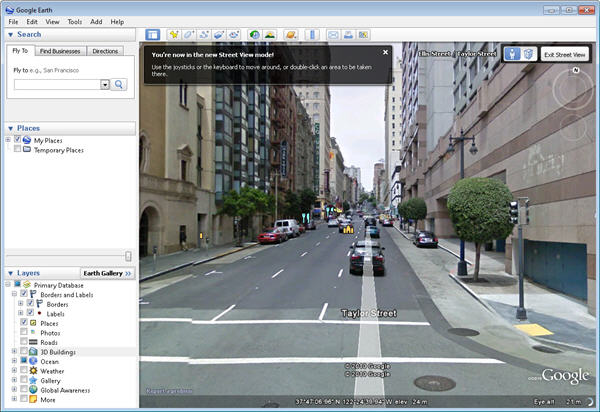 Integrated Street View. The popular Google Maps Street View functionality is now seamlessly integrated into Google Earth. You’ll see Pegman (the little orange guy from Google Maps) on the right side of the program’s interface, beside the navigation controls. To start using Street View on Google Earth, just do the same as in Google Maps: drag Pegman over the area of the map you want to visit, and Street View will be launched as usual.

3D Trees. Besides 3D buildings, Google Earth now supports three-dimensional trees to add even more realism to the environment. 3D trees prevent you from bumping into a tree when following Google Earth’s walking directions, and keep the scenery from looking like an isolated desert in the middle of nowhere.

Improved Historical Imagery. The Historical Imagery feature, added in Google Earth’s previous version, has been enhanced to make it clearer and simpler. Now every time there’s older imagery available from the area you’re browsing, Google Earth will display the date of the oldest images available in the status bar at the bottom of the screen.