Google Maps and Google Earth are edging closer and closer to becoming the same app. There is still a huge Google Earth feature missing from Google Maps though. One of the more lesser-known features of Google Earth Pro is the in-built hidden Flight Simulator. Accessible via the Tools Menu, the Flight Sim allows you to fly around the globe from a selected number of airports around the world.

This makes traveling the world using Google Earth a bit more interesting and fun than just panning it over with your mouse.

To access the Google flight simulator mode, go to the Tools menu and look for Enter Flight Simulator…

You can then choose between two types of planes. Also, you can choose whether to fly from your current position in Google Earth or take-off from a selection of different airports. 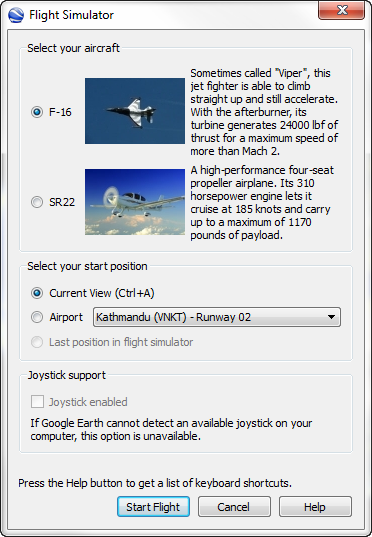 The controls for Google Earth Flight Simulator aren’t very clear. It isn’t as simple as pressing a start flight button. There is joystick support so you can use a Joystick if you’ve got one but if not, you’ll need to refer to this list of flight simulator keyboard controls. These keyboard shortcuts include the arrow keys, page up, ctrl, alt+a, and all manner of complicated keystroke and mouse controls. Note that they are different for Windows/Linux and Mac. 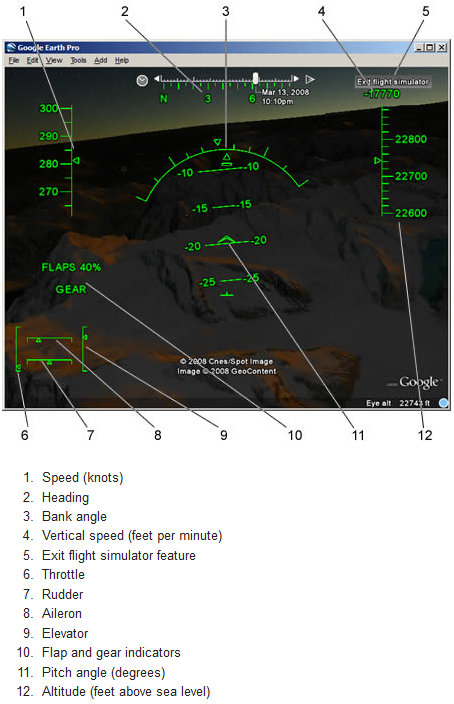 It takes a while to master the basics, especially controlling thrust and altitude to prevent crashing. Once you have, it’s fun flying around and clicking on points of interest as if you were browsing Google Earth normally. You can even land your plane by throttling down when you approach an airport and pressing G to extend the landing gear. It’s quite hard as you need to control your flaps as well as hitting both “.” and “,” to break the left and right wheels.